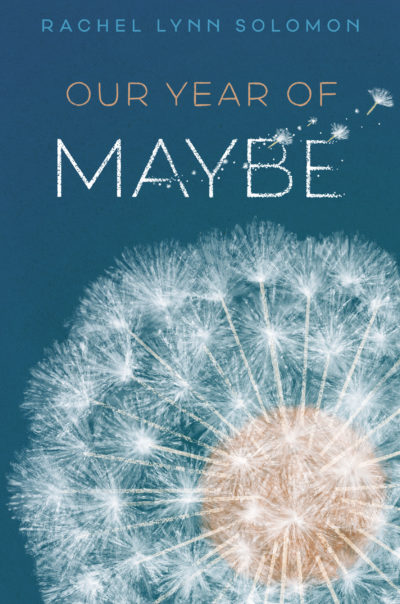 Aspiring choreographer Sophie Orenstein would do anything for Peter Rosenthal-Porter, who’s been on the kidney transplant list as long as she’s known him. Peter, a gifted pianist, is everything to Sophie: best friend, musical collaborator, secret crush. When she learns she’s a match, donating a kidney is an easy, obvious choice. She can’t help wondering if after the transplant, he’ll love her back the way she’s always wanted.

But Peter’s life post-transplant isn’t what either of them expected. Though he once had feelings for Sophie too, he’s now drawn to Chase, the guitarist in a band that happens to be looking for a keyboardist. And while neglected parts of Sophie’s world are calling to her—dance opportunities, new friends, a sister and niece she barely knows—she longs for a now-distant Peter more than ever, growing increasingly bitter he doesn’t seem to feel the same connection.

Peter fears he’ll forever be indebted to her. Sophie isn’t sure who she is without him. Then one heartbreaking night twists their relationship into something neither of them recognizes, leading them to question their past, their future, and whether their friendship is even worth fighting for.

After reading and enjoying Solomon’s debut novel, You’ll Miss Me When I’m Gone, I was thrilled to connect with her by email about her latest work that I’ve already preordered. Here are the highlights:

EZ: What planted the seed for Our Year of Maybe?

RLS: I find organ donation extremely fascinating–I can’t imagine a more selfless act. I wanted to explore the aftermath of a kidney transplant between best friends because I imagined there would be a lot of complicated feelings there. As I grew to know my characters better, though, I wondered if this selfless act did actually include a bit of selfishness. Sophie, the donor, is in love with her best friend Peter, the recipient, and part of her hopes that after the transplant, he’ll love her back. It’s a very small part, she acknowledges–but it’s still there. I wanted to swim around in all that messiness.

RLS: The biggest difference is that book 2 happened on a much shorter timeline. I wrote the first draft over a period of a few months in early 2016, then set it aside for a year (huge mistake) while working on revisions for my debut. When I picked OUR YEAR OF MAYBE back up in the summer of 2017 a couple months before it was due to my editor, there was a lot I didn’t love and wanted to change, which led to a slightly feverish rewrite. (And then another once my editor read it.) Both my debut and OYOM are dual POV, so I applied a lot of what I learned in terms of distinguishing the voices and making sure each character had a complete arc.

EZ: Where do you best like to write? (What environment is most conducive to your creativity?)

RLS: I do most of my writing at a local coffee shop across the street from a lake, with big windows and amazing hot chocolate.

EZ: What are your must-haves when writing?

RLS: I struggle to focus on writing when it’s quiet, but I also can’t write if the music is too familiar, which is why writing in coffee shops works so well for me–there’s music, but I don’t have control over it. I also enjoy having a warm sugary beverage beside me, either chai or hot chocolate.

EZ: What’s the best writing advice you’ve ever received or that you’d give to a fellow writer?

RLS: Someone gave me this advice once, and it’s really stuck with me: if your characters are crying, then your reader doesn’t have to. If your characters are laughing, then your reader doesn’t have to. Essentially, it’s about showing vs. telling–instead of having the characters burst into tears or laughter to tell the reader how they should feel, show the reader that what’s happening is sad or funny or insert adjective here. If a character is crying on page 1, I’m not quite sure how to react–I don’t know enough about them yet to connect with their journey. Not saying it can never work, but I try to torture my characters for as long as possible before I allow them to cry.

EZ: Are there any craft books you love (and why do you love them)? 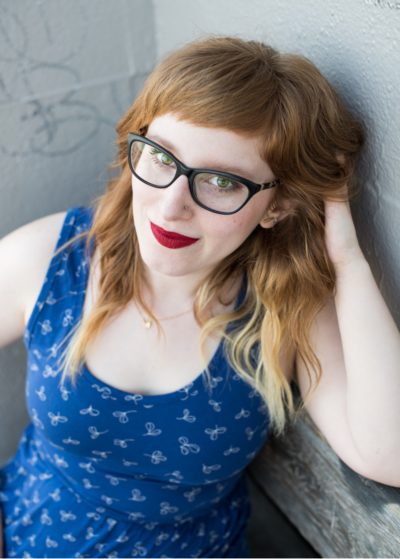 RLS: Not exactly a craft book, but BIRD BY BIRD helped me out of a writing rut and gave me the permission I needed to write terrible first drafts. All I need from a draft is something book-shaped–I can make it pretty later.

EZ: What are you reading now? (Any recent reads that you couldn’t put down?)

RLS: I read it a couple months ago, but I still can’t stop thinking about A HEART IN A BODY IN THE WORLD by Deb Caletti. I’ve never read anything that so fully and painfully captures how it feels to be a teen girl.

EZ: How does being an author of a sophomore book compare to being a debut author in terms of pressures and expectations?

RLS: I feel somewhat less pressure this time around, I think, but there’s so much emphasis on The Debut when the second book is often much tougher to write. The second book is the one (usually) forged in the midst of debut year anxiety and self-doubt. I was revising OYOM while early reviews from YMMWIG were coming in, which was difficult for a while. I had to focus on writing the book primarily for myself–and more specifically, my teenage self–as opposed to writing it to change the mind of the person who gave YMMWIG 2 stars on Goodreads, haha. The best part of promoting my second book has been seeing readers who enjoyed YMMWIG excited for OYOM–it’s a surreal and wonderful thing that someone I’ve never met is looking forward to reading more of my words. I’m so, so grateful.

You can learn more about Rachel Lynn Solomon and her work by visiting her website, or following her on Twitter and on Instagram. Our Year of Maybe can be purchased wherever books are sold.

Disclosure: No goods or services were exchanged for this post.