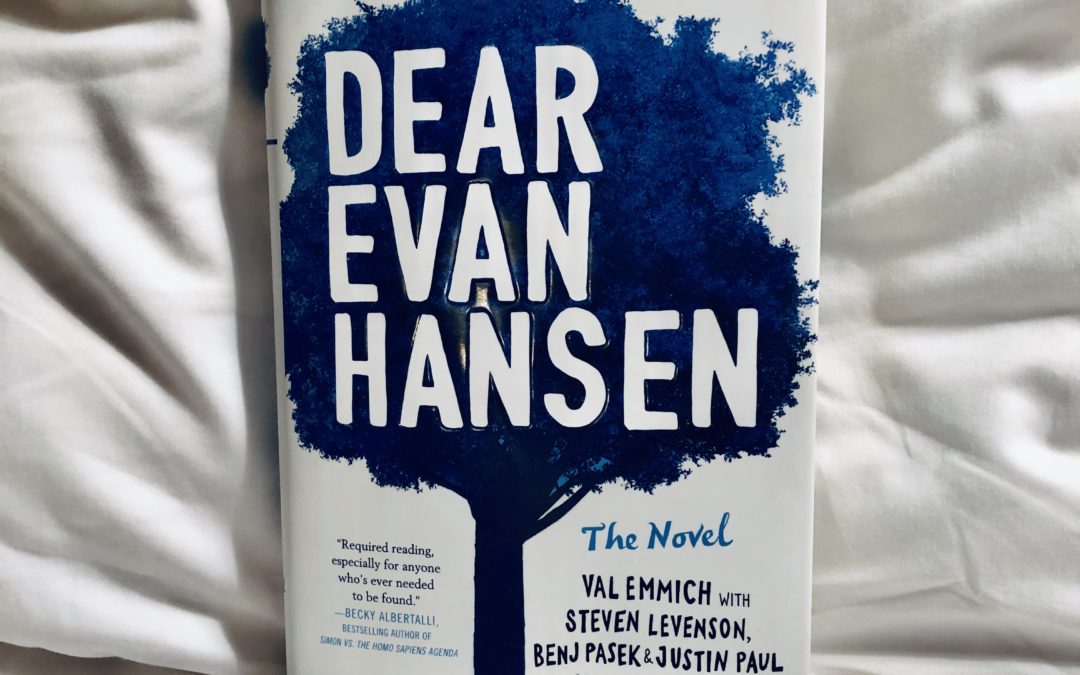 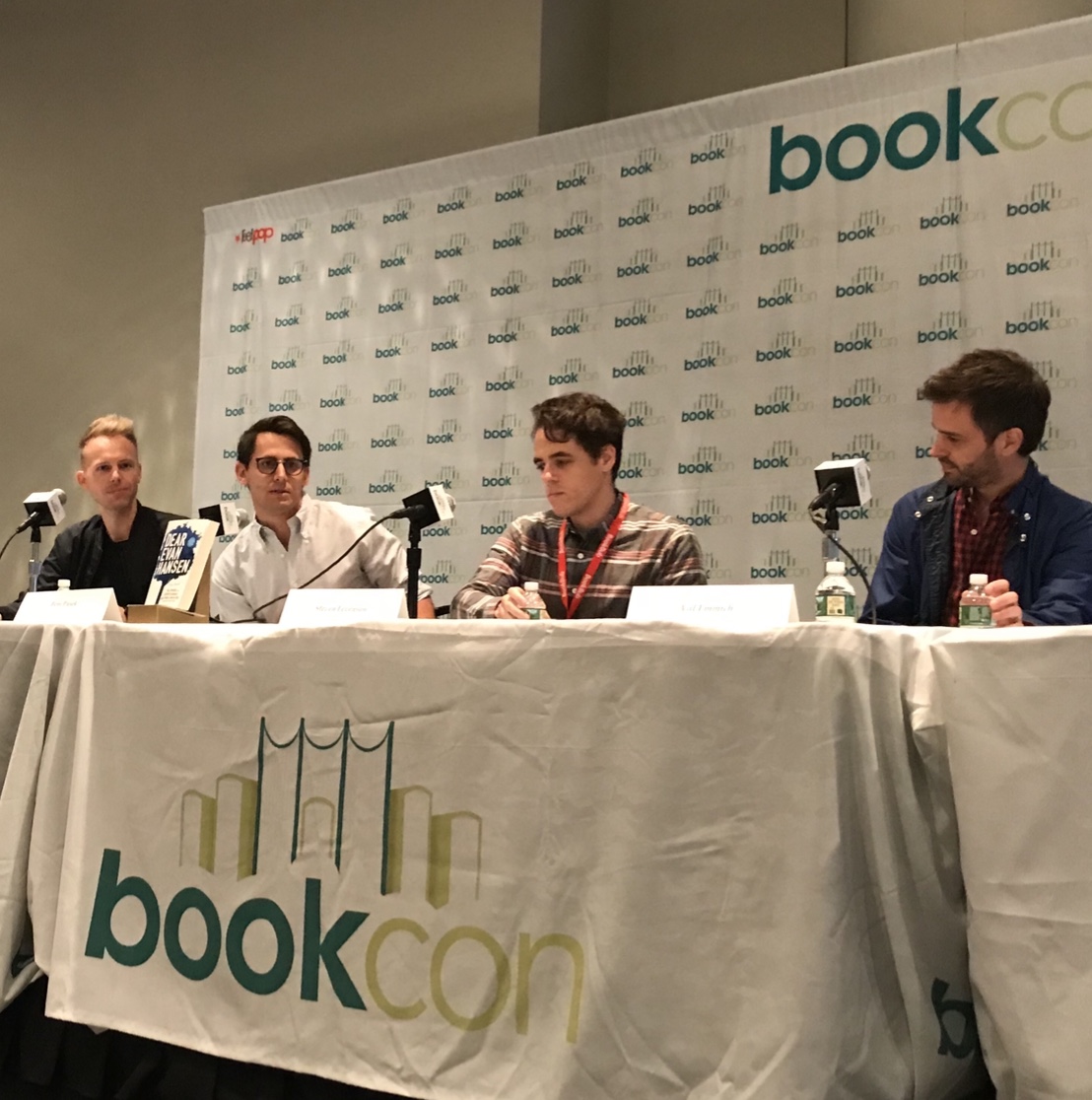 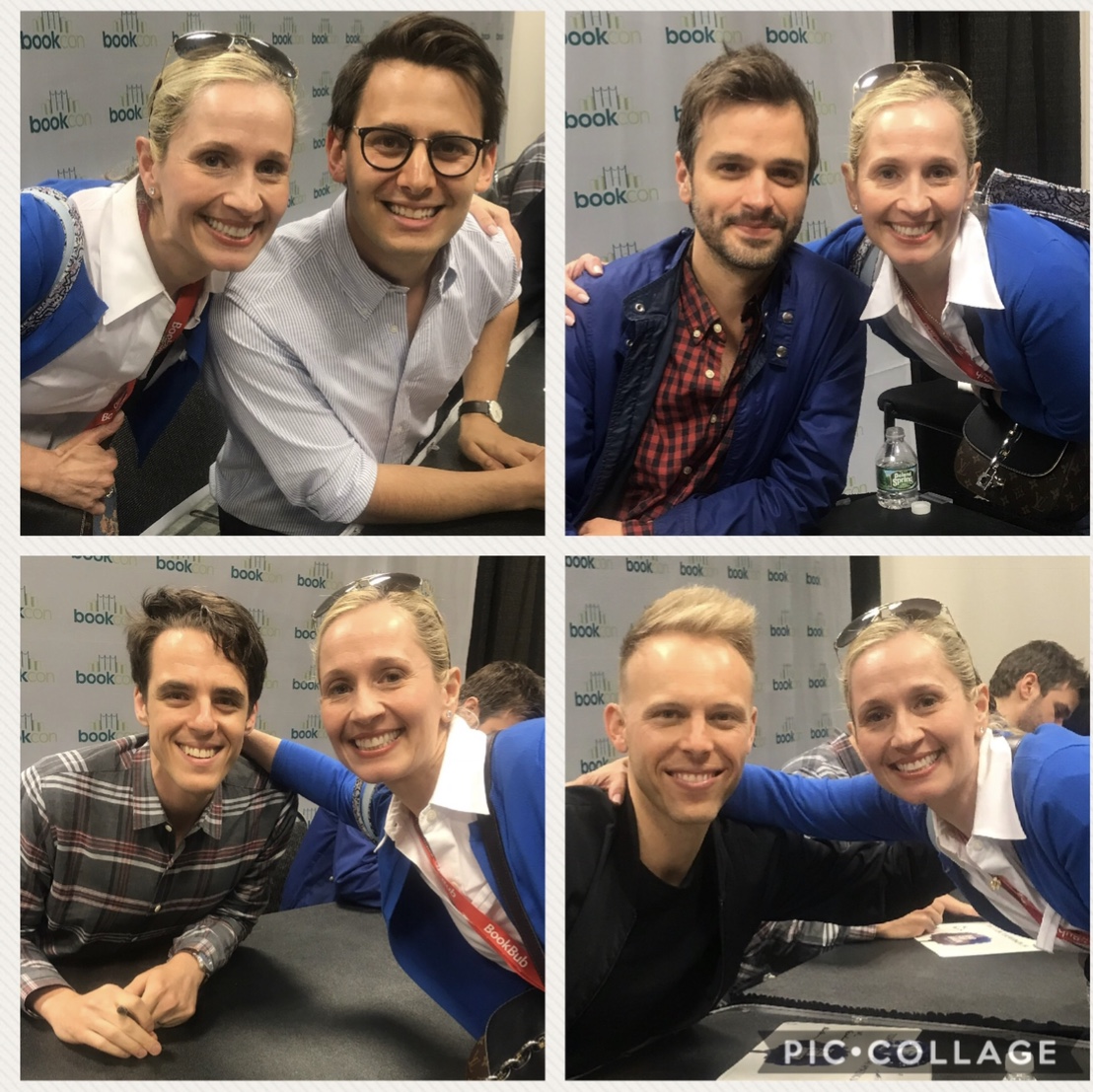 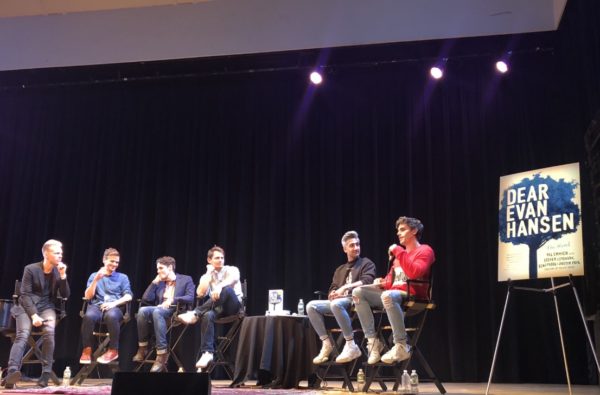 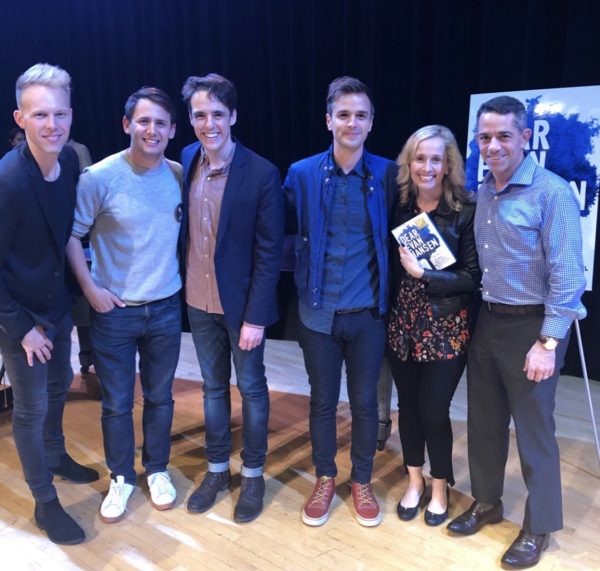 At Dear Evan Hansen: The Novel book launch at Town Hall in October 2018. Even my husband (far right) is a fan!

A singer/songwriter, actor (30 Rock, Ugly Betty, etc.), and novelist, Emmich was kind enough to share what it was like to work on Dear Evan Hansen: The Novel and give us a glimpse of his creative life:

Overall, how was the experience working with the Dear Evan Hansen team (Steven Levenson and Pasek & Paul and the publishing team) to turn an extraordinary musical into a young adult book? What were the highs and the challenges?

In some ways it was easy because I had source material of the highest quality. But that also made it challenging, because I had to meet such a high standard. There are expectations with this book and some of those expectations are unfair. A book can’t do what a musical can do. However, the opposite is also true. A book can really take its time and give a close-up, intimate view of characters. The hardest obstacle was making sure the really big, emotional moments on stage had enough of a wallop on the page. The team was always there to gently nudge me when I wasn’t being faithful enough to the show and they also allowed me the freedom to do my own thing, particularly when it came to backstory.

Did you have any reservations about diving into the young adult book space, especially after writing your first novel, The Reminders? And did you have any idea what you were getting yourself into (DEH’s fans are among the most amazing and devoted, and readers of YA books are a smart and discriminating bunch)?

I was overwhelmed with reservations. I saw how devoted the DEH fanbase is and I didn’t want to disappoint them. I also didn’t want to disappoint Steven, Benj and Justin. They’ve worked so hard to make this story what it is and I wanted to honor that. In the end, I tried to trust my own emotions. I related to the character of Evan immediately and I knew that if I stayed true to that shared experience, I’d be okay.

You are a multi-talented and creative person. How did your musical and acting background inform/enhance the writing of Dear Evan Hansen?

I’ve put in my 10,000 hours as a songwriter, so breaking down songs is instinctive to me. I created a playlist that I’d listen to while writing. The playlist included every song from the show. I’d listen to whatever song matched the scene I was writing and it would give me insight into what the characters were feeling. I always knew that I wanted to somehow honor the show’s music in the novel and I found varied ways of doing that. One example occurs in the beginning of the book in the opening scene with Evan and his mom, Heidi. In the show, Heidi sings the song “Anybody Have A Map?” in which she reveals her misgivings about how she’s performing as a mother. The book is mainly told from Evan’s point of view, so I couldn’t show all of what Heidi was feeling in that moment. Instead, she walks up to a physical map on Evan’s wall and that leads to a revealing discussion between the two of them. In the song, the map is a metaphor. In the book, it’s a literal thing.

How did you prepare with the team and solo to write the novel, and did you have a particular process?

I saw the show twice and had a copy of the book that Steven wrote. When I had questions, I’d email the guys and our editor, Farrin Jacobs. I referred to a few other novels, mostly YA, to get a clearer picture of what I wanted our novel to be. I also spoke at length with people clued into high school—my nieces and nephews, as well as my teacher friends. After that, it was just sitting at my desk every day and writing. The hardest part for me when starting a new piece is finding the voice, in this case Evan and Connor’s. How they speak and think, how they tell their story. That takes the longest.

Where and when do you like to write (music, novels, etc.), and what are a few must-haves on your person/desk or in your work space to stay inspired?

I write mainly in two places, both alone. At my desk and in the bathtub. The bathtub is full of water. It takes some practice not to electrocute myself.** I haven’t found a better place for feeling totally isolated and shut off from the world. Also, there’s something about water that works for me.

What would you say was the best, most fulfilling part of the Dear Evan Hansen writing experience? Was there anything new you learned about yourself or otherwise along the way?

Getting a chance to flesh out the character of Connor Murphy with the guys was definitely the most rewarding. I think that’s the main area where the novel and the show are different. In the show, we only know Connor through the lens of Evan. In the book, we get to know the real Connor. Writing his story was emotionally taxing. I just wanted to make sure it was handled with the utmost care and respect.

Which character in Dear Evan Hansen do you most relate to and why? And what, if any, advice would you offer them?

I relate most to Evan. I, too, am a shy, anxious, neurotic person. I’m proud to be involved with a story that promotes a message of hope, that we are not alone in our loneliness. I’d add that our mistakes may seem insurmountable in the moment, but most of the time there really is a way out. There is a tomorrow.

What projects (in any of your many fields) are on the horizon for you?

I’ve just released some new music, an EP called Autobio, Part 2 which is available to stream through all the usual platforms. I’ve also recorded a cover of “If I Could Tell Her” from the Dear Evan Hansen musical, which I performed on tour with Benj and Justin. And I just started a new novel. It’s too early to know if it’s worth finishing. We’ll see. 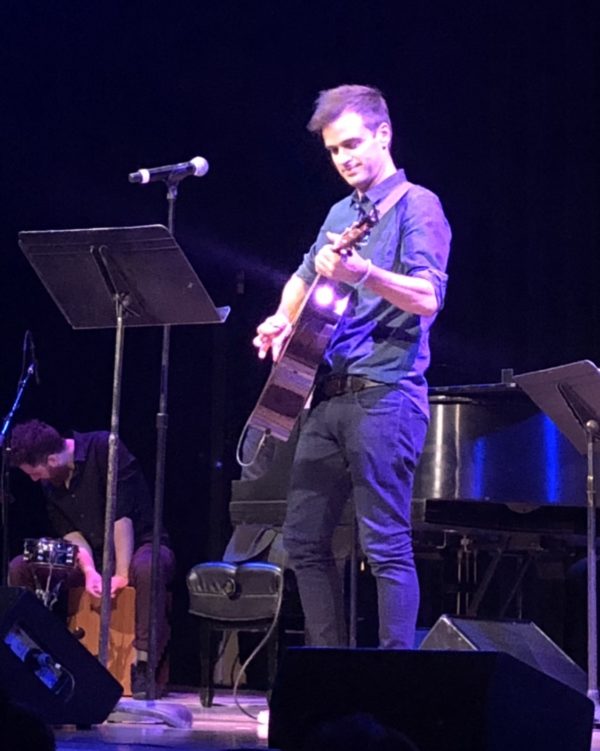 Favorite recent/current read and why: The North Water by Ian McGuire. Beautifully written and researched while also swift and suspenseful.

Favorite recent/classic artist/album and why? This is probably bad to say, since I release albums myself, but I listen mostly to singles these days. “Origins” by Tennis is a current favorite.

To learn more about Emmich, visit his website. Dear Evan Hansen: The Novel is available wherever books are sold.

*No offense to A Chorus Line, Jersey Boys, Cabaret, Hairspray, Rent, Sunday in the Park with George…you know I adore you.

**Do not try this at home! (And Val—please don’t electrocute yourself!)